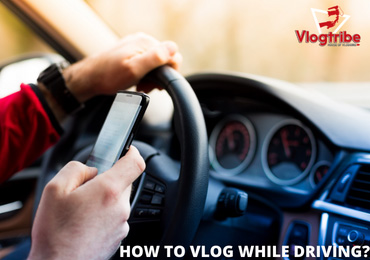 Many of YouTube’s microgenres revolve around automobile interiors.

Most of these YouTube creators have dashboard cameras that are physically close to them, so videos set in cars tend to evoke the intimacy and familiarity that often occurs in the front row of a vehicle.

Consequently, there is some question about whether vlogging while driving is legal or not.

In this article, you’ll learn about the regulations of driving while filming and how to vlog while driving safely.

Is Vlogging While Driving Illegal?

While vlogging while driving is not technically illegal, several states have laws prohibiting cell phone usage and distracted driving that could apply to vlogging depending on how you record and manage the process.

If the police pull you over in the UK for using a handheld phone or camera while driving, you will be fined. Additionally, you might even face a six-point penalty or a £200 fine, or even both.

Vloggers now use hands-free cameras to record YouTube videos. Pressing the record button starts recording. Hands-free driving is legal in most locations as long as you don’t touch the wheel. Distracted driving is a crime, even if you’re only vlogging while driving.

It was found out that over 2,800 people were killed, and an estimated 400,000 were wounded in crashes involving a distracted driver in the United States in 2018. According to the CDC website, 25% of distracted drivers involved in fatal crashes in 2018 were young adults aged 20–29. Among drivers involved in fatal crashes, those aged 15-19 were more likely to be distracted than 20 and older. The 8% of drivers aged 15 to 19 were distracted at the time of the collision.

Even though these deaths and injuries include a broad spectrum of distractions, they help to show the genuine risk that distracted driving of any kind has for drivers, their passengers, and those inside and outside of other vehicles on the road.

Driving while distracted increases the risk of an accident that might harm or even kill you or the people around you. This is a simple fact.

6 Tips on How To Prepare Your Car Vlog

Vlogging while driving is highly discouraged. However, if you choose to do so because it is necessary for the type of content you are making, there are a few precautions you should take to ensure your safety.

As with a blog or social media account, you’ll want to segment your content ideas. Begin with broad topic groupings and progress down to individual videos.

Each entity has its definition of an ideal customer—individuals who are more likely to buy what they sell. Compared to traditional marketing, content marketing allows you to target your desired audience more precisely, but only if done correctly.

Your video is just as strong as the content it contains. Even before you start filming, be sure you’ve done your homework on the subject. Make sure you know nearly everything there is to know about the topic.

After all, content marketing aims to deliver the proper information to the relevant audience in the proper time, and a complete strategy can assist you in accomplishing this.

People have rights, and our rights as human beings are guaranteed in the constitution. That is why every YouTube vlogger should be familiar with legal terminology and its associated rights and potential legal consequences of specific actions.

YouTuber Zoella, whose actual name is Zoe Sugg, takes her eyes off the road six times in “Pug Party!”. The UK Police has admonished her for this behavior. Metropolitan police said this woman could have killed someone in a statement to Now magazine.

The practice of vlogging while behind the wheel is not unlawful. In contrast, if you’re using a smartphone or a vlogging camera while holding it in your hand. By doing this, you are violating the law and disregarding the rules of the road, which is illegal.

Use Mounts or Phone Holder

You may be able to capture better images using a windshield mount, but it may overheat your phone on sunny days. Try to find mounts with adjustable heads and extensible arms so you can be more versatile.

Have Someone to Assist You

It’s evident to anyone who’s seen a video blogger in action looking directly into a smartphone camera while driving is a type of distraction.

According to some estimates, drivers must take their eyes off the road for an average of 4.6 seconds each time they read a text message. Vloggers often keep eye contact with the camera for long periods of time. Just keep in mind that the time it takes to read a text while driving 55 mph could easily be enough time to complete a football field’s worth of distance.

It is much safer to vlog while driving when another person accompanies you. They could take care of your equipment and do the majority of the talking points while you concentrate on driving and occasional input on the conversation.

Prepare and Test Your Equipment

With a GoPro or other action camera, your regular vlogging camera, a dashcam, or even your phone, vlogging on a road trip is simple.

When it comes to vlogging, gear and gadgets play a significant role. The most crucial step is to pick suitable microphones and recording gear. Make sure you rehearse in a safe location before taking your equipment on the road.

While driving, it’s crucial to pay attention to the sound.

With a suction mount, you may attach your phone to your automobile’s windshield. Attaching the holder to the side of the windscreen where it won’t obstruct your vision is ideal for road safety because it’s simple to install and remove.

When you’re filming, there’s a good likelihood that you’ll look away from the road when you see a notification flash on your screen.

Additionally, ensure that you comply with your state and state of residence legislation before using a phone while driving. As long as your phone is out in front of you while driving, a police officer may have a reasonable suspicion that you’ve used it.

Make sure your phone’s battery is fully charged so that you will not encounter any problems.

Installing a dashcam in your automobile allows you to record while you’re behind the wheel. Professional drivers use dash cams to ensure that they are protected legally in the case of a collision.

For driver vlogging, dash cams are capable of capturing stunning, high-quality film. If you’re looking for a camera that you can set and forget, this is the one for you. As long as the wires are tucked away neatly, this is a long-term solution that is permanently attached to the windshield.

When you’re on a road trip, a GoPro is an ideal camera to bring along. Due to the cameras’ modest size, you can place them nearly anywhere inside or outside your vehicle and capture high-quality film of your driving.

There are a variety of GoPro cameras and mounts that you may use to record your road trips or create a dashcam. All you need is a GoPro camera and one or more mounts or tripods, and you’re ready to go.

Make the most of your GoPro’s versatility by taking advantage of the opportunity to get creative and put it to the test while you’re on the road. Do not forget to include lifestyle photos of your fellow passengers when filming a car trip with a GoPro.

A video of your entire drive might be highly lengthy and dull to watch, even if you’re taking the most scenic route possible.

Additionally, it will consume a significant amount of space on your memory card, especially if you’re recording a lengthy journey. You may attempt to turn it into a timelapse.

Before you begin driving, press the record button.

Avoid using your camera in any way while driving. Unnecessary footage can be cut out during the post-production process.

Don’t even look at yourself on the camera’s flip screen if it has one. Many states have laws prohibiting this. Set up your shot before you start driving so that you can record without constantly double-checking your framing.

Can You Make Vlogs While Driving a Motorcycle?

Yes, you can. For content creators who enjoy riding, motovlogging has become a hugely popular pastime. However, it is essential to remember that motovlogging and vlogging while driving a car are subject to the same laws. Cameras should not be used as handheld devices but instead mounted.

In addition, you should keep in mind that motovlogging involves the purchase of audio and video recording equipment. Your vlog’s quality is entirely dependent on the camera you use. Your efforts can potentially suffer if you use low-quality videos.

That’s why you should get an action camera capable of capturing high-quality footage and delivering crisp images. Consider the camera’s mounting system, whether it’s on your bike or helmet, or both.

For additional ideas, check out motovloggers such as Walterrific, 6Foot4Honda, and RoyalJordanian. These content creators can guide you through the process of creating your vlog. Equip yourself with tips and tactics for better vlogging while driving a motorcycle.

You should remember that it’s perfectly acceptable to be inspired by other people’s ideas, but you should never try to imitate their shenanigans. Even if you believe that the work of others is superior, you should strive to demonstrate your individuality.

Trying to be like other vloggers will make your videos lack personality. Make each video a unique representation of your individuality. Your YouTube channel will gain a following and become your identity with time.

Also, remember to be spontaneous when being videotaped. It will allow the audience to follow you around as you explore the sights. Keep your films fresh without posting overly predictable plots. The information should be kept short and new.

Adding a creative dimension to an activity, such as motorcycle riding, is an excellent way to share your passion with others. That is why motovlogging is such a fun activity for so many people. As more bikers begin vlogging, online motorcycle communities will grow and thrive.

Vlogging can be viewed as fun entertainment. Making videos of one’s activities can serve to preserve one’s memories.

This article has addressed the question, “How to vlog while driving?” in the hopes of empowering you with the knowledge to carry out your vlog ideas without worrying about severe consequences down the road.

However, it would be best if you always remembered that, above all else, safety should always come first. A sense of duty should direct our efforts to prevent property damage or even loss of life.

Are Vlogging Cameras Good for Photography? Comparison and Review