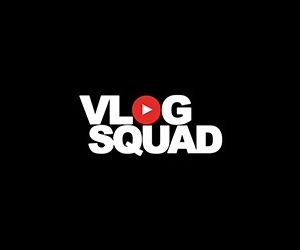 It is time to meet the legendary Vlog Squad.

If you haven’t heard of them before, this article is the right place to get to know them better.

The Vlog Squad became one of the most popular YouTube channels in 2017 when it was a trend to team up with your YouTube friends and create hilarious videos.

Interesting fact: each of the Squad members has his own YouTube channel with over 1M subscribers.

So, who are vlog squad members?

As we mentioned before, the Vlog Squad is mostly known for their funny videos that can be found on YouTube. Let us help you to meet the members of this funny YouTube squad.

He usually uploads new videos 3 times a week and he is the “leader” of the Vlog Squad. You can check his channel because he is always filming something interesting.

Maybe you’ve heard about David Dobrik and his career, which started with Vine and then he started uploading videos on his YouTube channel. However, you might not know some facts about him.

David’s pranks are funny and enjoyable to watch. All of his pranks are not mean or offensive it gives a natural laugh when you watch his videos. For today, David Dobrik’s net worth is around $2.5M.

If you think that you know everything about David Dobrik, you might don’t know these fun facts that are actually REAL:

Heath Hussar is a YouTuber and a famous Viner.

Besides, on Vine, he has gained over 3M fans and, after that, decided to collaborate with Zane Hijazi. Now they are called Zane & Heath.

Heath owns a YouTube channel with over 800K subscribers. He is a popular social media name for many years now. Heath is still growing a significant amount of following on his channel.

Also, he is collaborating with Zane Hijazi and making an iconic duo found on the YouTube platform.

Zane is also a very famous American Youtuber that creates funny videos and vines. For now, he has over 2.8M subscribers on his YouTube channel. He had become very popular after collaborating with Heath Hussar to create funny vine videos.

Interesting Facts:
The Reason Why We Hated Each Other - UNFILTERED #1

He is a writer-director.

However, he is mostly known for being a member of the Vlog Squad. His YouTube channel has over 1.2M subscribers and the number is still rising.

We need to mention that Alex Ernst is a roommate of David Dobrik and makes a lot of effort for Vlog Squad videos.

Most of his popularity came from the Vine app and the videos. As for now, his net worth is $600K. Alex is living in Los Angeles and has a group of great friends that are participating in his crazy video ideas.

The most successful Vlog Squad member.

She was dating David Dobrik and also, she was attending Met Gala as a Vogue correspondent!

Also, she runs a successful YouTube channel with over 16M subscribers. As for now, her net worth is $4.4M and it is rising according to her popularity.

You might also know him as the star of Drake & Josh.

Also, he makes his own content. However, he shows up a lot in David Dobrik’s videos.

Josh Peck is mostly known for his acting skills since he was a child. He was a famous actor in the “Drake & Josh” show on Nickelodeon.

His appearance on the Vlog Squad is random and he is the oldest guy on the squad.

Most of the members make fun of his age. However, he doesn’t take it too seriously and plays along in a good way.

Jason Nash is known as an American actor, filmmaker, and social media star.

Also, he is an advanced comedian and has been attending stand-up shows for over 20 years.

She and Jason Nash have been a YouTube couple, however, they are no longer together.

She is not in the squad anymore because she compared David Dobrik to Ted Bundy. Despite it, Trisha has successfully continued to make her content.

Trisha Paytas is known as an American social media personality, musician, actress. Also, she runs her own YouTube channel. She talks about a variety of topics on her channel that attracts and entertains her audience.

She uploads content from fashion, beauty to comedy skits or even personalized vlogs about her relationships or personal life. With such a successfully rising internet business, her net worth is $4M and still rising.

His channel has over 1.1M subscribers and over 650K followers on Instagram.

Toddy Smith is presenting himself as a funny and quirky guy who doesn’t lie about his personality. His start of social media career started from Vine and hit a big number of followers.

After he moved to YouTube and expanded his number of subscribers. Most of Toddy’s YouTube content is prank videos and a healthy amount of vlogs. You can find Scotty Sire, Zane Hijazi, David Dobrik in most of Toddy’s videos.

Is it Worth Subscribing to Vlog Squad Channel?

Despite the fact that David Dobrik and Dom Zeglaitis were canceled by YouTube and its community and the vlog squad is not very active anymore – you might check other team members as well. Moreover, David Dobrik is also back.

What Headphones Does Joe Rogan Use for Podcasts?

Why PewDiePie is Popular and Famous YouTuber?