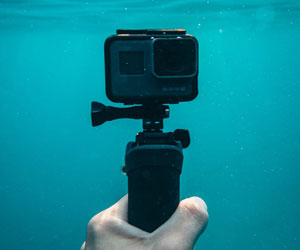 Vloggers love shooting videos from the most amazing places in the world. By creating these beautiful videos usually, people go underwater to get some beautiful shots as well.

If you would like to add this element to your vlog, we recommend you check this list of the best waterproof vlogging cameras.

In this article, I want to share my TOP 5 BEST WATERPROOF VLOGGING CAMERAS that will change the way of vlogging experience.

If you are wondering about being a professional vlogger, you have to put a waterproof vlogging camera into your vlogging equipment. 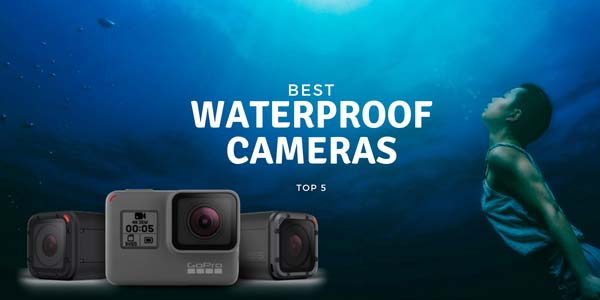 All listed waterproof vlogging cameras were reviewed by vlogtribe.com editors.

Every new year GoPro releases the brand new edition of the GoPro Hero camera. This year we were waiting for the latest version, and finally, we got the best action and best waterproof camera for vloggers and YouTubers in one device.

We have already tested this camera, and it is incredible, let’s see why:

First of all, the price is really budget-friendly. If you don’t have a massive budget for a vlogging camera, you can buy GoPro Hero 10 Black, just less than $500.

Overall it is a fantastic camera for every type of vlogger or YouTuber, but the question is, do I really need to buy the newest version of GoPro?

However, you will find more upgrades and better quality in the GoPro Hero 10 Black. Will that quality be visible in the vlogs? Probably not, but what you will definitely see is the amazing video stabilization.

Should I buy the newest GoPro Hero 10 Black?

I have the crystal clear answer:

If you have the GoPro Hero 8 or 9 Black – then you shouldn’t because the older version is also amazing and delivers everything you need for the amazing video footage. Anyway, if you have an older model like Hero 7,6, 5, etc. then go for it – you should see a difference!

Value for Money
10
Ease Of Use
10
Functionality
10

Olympus TG-6 definitely must be in this best waterproof vlogging cameras list.

First of all, the older version of this camera was named the “Best Rugged Camera in 2017“.

The new model is even better!

The fact is that you can take this camera with you and take a shot even in the most dangerous and rugged environments. Viewers love that type of vlogs!

This camera perfectly works even in low light areas by using specialized image sensors and a dual-quad TruePic VIII processor, which increases the quality of the photo also in unclaimed and dark places.

Moreover, Olympus TG-5 has a blazing-fast lens, which was made, as I mentioned, for capturing your adventures in the most beautiful places on the earth and underwater as well.

Also, this camera is an excellent option for people who love extreme entertainment like scuba diving, water motorcycle, and so on.

The camera could dive underwater about 50ft (15m), which is a pretty good result in the fact that you are looking waterproof camera for vlogging, not for deep diving, right?

The feature of this camera I love the most is the RAW editor inside the camera. After capturing photos, you can instantly edit the photo by adding some light or configuring noise levels. In some cases, this feature might save your time for getting a better quality of the picture with these specific filters.

As a matter of fact, it has a pretty good camera as well: Ultra HD 4K or FULL HD with 120fps videos, 12-megapixel BSI CMOS sensors, and F2.0 lenses. These features will let you shooting spectacular videos and photos.

It is one of the best waterproof vlogging cameras on the market in 2022. Outstanding quality of shooting videos and taking a photo in any place at any time. On the other hand, to my mind, despite a lot of amazing features, it is too expensive in comparison with compact cameras. But if you are vlogger who is searching for a reliable, rugged camera, it’s definitely good choice.

Value for Money
9
Ease Of Use
10
Functionality
10

Why if we recommend the Hero 10 Black version as the first option why you should think about choosing GoPro Hero 8 Black?

True, the GoPro Hero 9 Black is also an extremely good camera, but at this point, we decided not to include a camera that is in the middle of the choices.

If you want to save additional bucks for an action + waterproof camera – this choice is perfect!

First of all, this camera has an insanely smooth video also, and it doesn’t even matter what kind of area you are filming your vlog!

In general, the new camera from GoPro has an amazing value for money in comparison with a lot of waterproof cameras.

This camera doesn’t have a significant difference, which might change your vlogging content so much – but according to the price and if you are looking for a new waterproof vlogging camera for a great price – GoPro Hero 8 Black is highly recommended by us!

This camera perfectly fits all vloggers needs and requirements to create some shot for their video underwater.

GoPro Hero 8 Black has a durable and comfortable design, and the most important thing is that the camera is rugged and waterproof to 33ft (10m) without any case also!

Also, for vloggers, there is an essential feature that connectivity with the phone works fantastically. Besides that, an audio signal without any additional mic works fine; you could clearly hear your text in the raw footage.

I have already mentioned - this is a super good camera for action and underwater vlogging. Of course, it lacks some of the features which are in the new model, but overall - if you don't want to spend more money, GoPro Hero 8 Black is more than enough for amazing shoots.

Value for Money
10
Ease Of Use
10
Functionality
9

It seems to me that Nikon W300 Waterproof camera has a decidedly severe design. It looks like a standard vlogging camera that can‘t be broken.

Moreover, it was made with a hard plastic body, which, literally, makes this camera one of the most rugged, waterproof vlogging cameras in the world.

With this camera, you can capture footage in various places with different conditions because it has perfect protection from the harsh environment.

Nikon W300 has a 16-megapixel camera that performs quite well in decent light or daylight. Moreover, it is protected with added GPS to track camera location if you lose it while you will be shooting your adventures underwater or somewhere else with a 4K video recording feature.

To make your life easier, creators also added footage transferring features from the camera to your phone automatically. Basically, if you will break down the camera, photos will be sent protected on your phone. But in general, you have to show some effort if you want to break down this camera.

This camera is the perfect choice for vloggers who are interested in deep diving and taking some shots they’re underwater! Nikon W300 can easily replace all heavy video techniques for filming various shots underwater!

The major drawback of this camera is that you need to make some adjustments of the light or even the place to get high-quality photos or even video footage.
PROS:
CONS:
8.7Expert Score
Perfect!

All in all, this is one of the toughest cameras in the competition in comparison to how many feet it can dive. This camera could dive twice as far nearest competitor 100ft (30m). On the other hand, image quality isn’t superior and sometimes even your smartphone can give you better image quality. However, a lot of deep divers and even vloggers have this camera in their vlogging equipment because of its tough design.

Value for Money
9
Ease Of Use
8
Functionality
9

If you have kids, brothers, sisters, or even you are a younger age vlogger and you are looking for the best waterproof vlogging camera, this Fujifilm FinePix XP80 is a good choice for you!

Let’s start from there that this camera is the cheapest device on this list. But if it’s cheapest, it doesn’t mean that it’s unreliable or even invalid for vlogging – not at all.

This camera, like its competitors, is made from very tough materials and could also be named as one of the most rugged cameras in 2022.

It’s effortless to learn how to use this camera. It doesn’t have tons of buttons on its housing, which makes vlogging even faster and easier. Basically, you can reach all buttons on the housing just with one finger. It is a compact camera, and the design is very similar to its competitors – Nikon W300 and Olympus TG-5.

What impressed me the most was the quality of the pictures and videos.

For this price, the camera should exceed your expectations for sure. It has a Full HD 1080p video capture resolution and 16-megapixels CMOS Sensor, and optical image stabilization, which should increase the quality of the photo even more.

Another great feature of the camera is remote shooting. It’s like an additional benefit for vloggers. You could put your camera anywhere and control it from your phone via the application. There are all necessary functions like zoom adjustments, start recording command, and so on.

This could be named as one of the best waterproof vlogging cameras just because the price range and provided device features in comparison with competitors are good enough for vlogging.

The FujiFilm FinePix XP80 isn’t the best waterproof vlogging camera as you can see, but it has its upsides. The camera has a strong housing body and can be deep about 50 ft (15m) without any damage. Moreover, the price is affordable and it’s a perfect choice for starting vloggers who want to expand their shooting areas and take some shots in adventurous places.

Value for Money
8
Ease Of Use
9
Functionality
7

Currently, there are not so many highly recommended waterproof cameras for vlogging in the market at this moment. Maybe it is an open business niche for someone?

This list of best waterproof vlogging cameras is created considering user reviews and my personal experience.

Nevertheless, if you are a vlogger or just still thinking about this career and even making money from it, I would recommend having at least one waterproof vlogging camera in your equipment! It will make your vlog even better!

TOP 10 Best Cameras for Recording a Podcast in 2022

5 Best Poker Vlogging Cameras [How To Film It?]

We will be happy to hear your thoughts

We hate spam emails too. You will receive only emails that you are interested in directly to your mailbox.

How Much to Charge for Video Editing? Tips and Rates 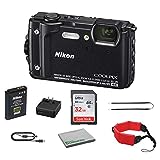 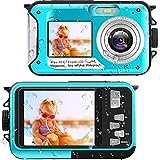